How to Love Others - By Being Interruptible 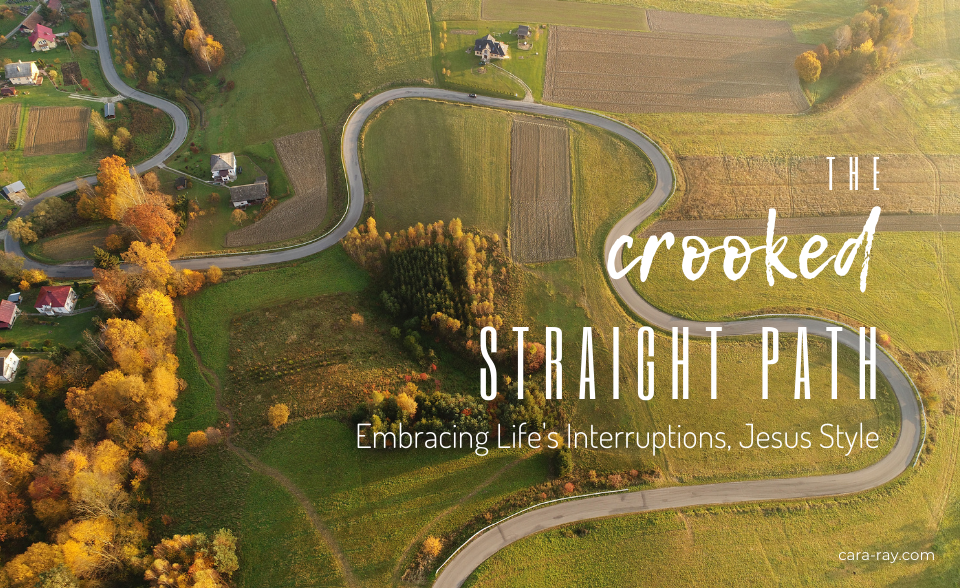 I love getting things done…maybe a bit too much.

There’s such satisfaction in checking off my tasks one by one.

As I’ve been working my way through the Gospel of Mark, I’ve noticed how often Jesus gets interrupted, and how unflappable he is in the midst of the interruptions.

He makes time for being with the Father, and he interrupts the deadly storm with three words, “Peace, be still.”

In Mark 5:21-43, he’s interrupted a few more times when Jairus, a ruler of the synagogue, pleaded with Jesus to come to his daughter’s bedside.

She was at the point of death, and he needed Jesus’ touch to heal her.

Her time was short, and it was ticking.

But as the pressing crowd moved along toward Jairus’ house, suddenly Jesus stopped.

“Who touched me?” he asked.

An unnamed woman, who likely preferred not to be seen or heard snuck into the fray of the pressing crowds, to touch Jesus.

Her twelve year battle with incessant bleeding, made her unclean, broke, and at her rope’s end. Jesus was her last chance and only hope.

Casting all social norms aside, she made her way through the crowd, touched his garment, and instantly she was healed.

She would’ve preferred to slip quietly away from the crowd without anyone noticing, but Jesus tenderly pulled her out of the shadows and drew attention to her miraculous healing.

Jesus lovingly reassured her that her status was no longer “unclean,” now she was “Daughter.” It was her well-placed faith in him that had made her well.

Her faith propelled her to act. His compassion compelled him to respond.

And yet, this miracle set Jairus’ original errand further behind schedule.

“While he was still speaking, there came from the ruler’s house some who said, “Your daughter is dead. Why trouble the Teacher any further?” (35).

The delay of interruption #1, proved life-giving for one, deadly for the other.

What was going through Jairus’ mind at that moment?

Could he have thought, “If only we hadn’t stopped, would my daughter still be alive?”

To be with Jesus must’ve been an exercise of rethinking the limits of time.

Jesus was never in a hurry. Isn’t that in itself remarkable? Even when others accused him of being “late,” he was using delay to put his power and glory on display.

He didn’t rush around or push people out of the way to make it to his next appointment. The people who interrupted him were his appointments.

Jesus finally made it to the little girl’s side, and for the second time that day, he touched the unclean, and made it clean. Immediately, the little girl bounded out of bed and walked into the kitchen for a meal.

Jesus was interruptible, because he loved people.

I want to be available for God to use me in those places and times I least expect.

But if I’m being honest, I don’t usually love people, more than I love being productive.

Unfortunately, I can feel put out or annoyed when someone wants more from me, especially when I think I don’t have time.

My interruptibility is directly tied to how busy I am, or how little margin I’ve built into my day to serve and love others.

The shortest distance between two points is a straight line, and we would like our to-do lists to follow this straight line pattern.

We don’t have time for detours, wrong turns, and interruptions.

Dietrich Bonhoeffer once wrote of the interruptions God makes in our lives by leading us down the crooked, straight path.

“We must be ready to allow ourselves to be interrupted by God. God will be constantly crossing our paths and canceling our plans by sending us people with claims and petitions. We may pass them by, preoccupied with our more important tasks…It is a strange fact that Christians and even ministers frequently consider their work so important and urgent that they will allow nothing to disturb them. They think they are doing God a service in this, but actually they are disdaining God’s ‘crooked yet straight path.'”

Are we willing to take the crooked yet straight path when our day takes unexpected twists and turns, so that we can love others, like Jesus did?

We should heartily do our work — with gusto and love! Productivity is good and necessary to our lives (and survival). Even Jesus set for us an example of living the most productive life imaginable. How many of us will be able to say at the end of our lives, like Jesus did, “It is finished.”(John 19:30)?

God will get us where we need to be, but it might not be in the time frame we originally expected. That is the crooked, yet straight path.

Let’s take it together.

If you haven’t grabbed my Quiet Time to Holy Leisure Time free download, be sure grab it here.